Settlers from Germany to Galicia and Bukovina – Vienna Records

During their travels, the immigrants from Germany to Galicia and Bukovina passed through Vienna (German: Wein) to register, be assigned to a village, and to collect travel money (about one florin per person in the group). In more current times those records were indexed by the archive in Vienna and images of those index cards and the original records from which they were extracted are on Family History Library microfilms, called Ansiedlerakten. Search for:

These microfilms have been digitized and can be viewed at home following instructions in Tip 2. The digitized films are noted with a camera icon rather than a microfilm roll icon.

The index cards are arranged alphabetically by your ancestor's surname, then given name. It appears that umlaut vowels are treated the same as the non-accented version. On the index cards are references to the original records, such as Fasz 8 Nr 37 ex März 1786 (found on the card of Mathias Gerhard Görz; further information below), and you'll see keywords like that in the listing of the films following the surname film listings. The original records are difficult to search through.

The index card will typically list the name of the immigrant, where he came from (top left side, Herkunftsort, etc.), the village and district where he will be settled (top right side, Ansiedlungsort, etc), when he passed through Vienna (Zeit des Nachweises), where he was born (geboren), his religion (Bekenntnis), his occupation (Beruf), the number of people in his group (Kopfzahl), as well as additional information. On the back of the card it is often noted that with him was his wife (Gattin) and the number of their children (Kindern), though names are typically not given for the spouse and children. Many of the index cards also note where in Schneider's book the person is listed in the form "Schneider 130/27" meaning page 130, line 27.

The information is as given by the settler and is not always accurate. For my four-greats-grandfather, Mathias Gerhard Görz, his place of origin and birth is given as Roxheim, which is incorrect, and notes that he was traveling with his wife and six children, which is correct, based on my own research. Interestingly, there is a second, later card for him that lists Badenheim as where he was born and where he was from, which is correct. This second card has dates after his pass-through in Vienna and notes his wife but only four children, two sons and two daughters. The second card also notes that they spent the winter of 1784/85 in Krosno, now in southern Poland between Jaslo and Sanok. 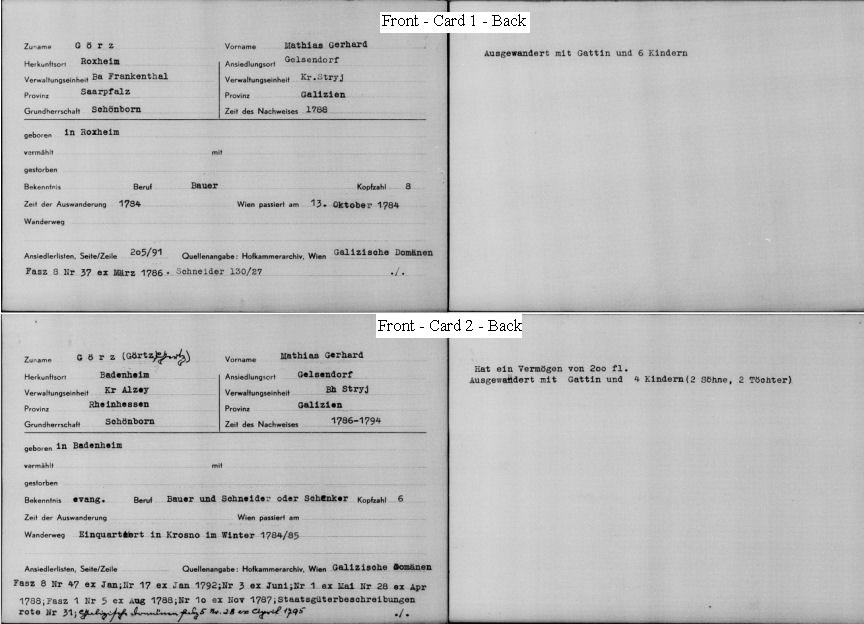 It's always a good idea to jot down the film and image number when you find something of interest, as it makes it easy to find the record if you decide to go back and look again. The images can be downloaded.

Example of Viewing a Church Record on Family Search

If You Know the Film Number

If you somehow know the FamilySearch film number, say 2267599, you can see if you can view it from home, from a Family History Center, or only at Salt Lake City as follows:

Holdings of the Polish Archives

Due to the constantly changing borders of Poland over the years records of some of our German ancestors in Galicia will be found in the Polish archives in Krakaw. Dave Gorz, our past president, gives a good summary here of the holdings of the Polish Archives and what's been filmed by the Family History Library (FHL).

We have also published a guide to the many databases and scanned records available in the Polish archives. Click here for a detailed description.

However, the best recent set of actual images of church records is at AGAD. It is all in Polish, but the detailed description link above make it possible for others to use the website.

By Dave Gorz.  Dave has taken the list of records filmed by the Family History Library and sorted them by village, religious denomination, and then births, marriages, etc. This is a quick and easy way to determine which FHL film number you need.  Once you have the film number, visit Tip 2 for instructions on how to access an online image, if it exists.

FamilySearch is digitizing all the FHL microfilms. Below is a list of FHL Galicia parish records that have been digitized, extracted by Dave Gorz in July 2017. FamilySearch is continuing to work on this project, so it might be just as easy to use the film number above and the instructions in Tip 2.

GGD has found that some records of interest to our members were not available from either the Family History Library nor AGAD. GGD paid researchers to go to Krakow archives and photograph those records.  The list of villages photographed is at the above link, but the actual photographs are only available to to GGD members. Click here to find out how to join.

Manfred Daum, a German researcher, has gone through the church and other records for over 300 Galician villages.  He compiled the results for each village in family books which give the reference to the church record or other record used.  If your ancestor is covered by one of these books, it will point you to the exact book and page number of what you need.

This article by Matthew R. Bielawa gives a good overview of the Catholic records of Galicia. The link above takes you to Matthew's article on the FamilySearch website.

The link above takes to you to a list provided courtesy of the Toronto Ukrainian Genealogy Group. It lists the Ukraine Archives File Number for Greek church records in villages in the former Galacia - some of which contain some German village Roman Catholic records as well. A second page gives the FHL film numbers which can then be viewed at the FamilySearch website by searching the Catalog.

These 1812 Lists of inhabitants in Josefsberg and Ugartsthal, as transcribed by Ernst Hexel in 1974, are available on LDS film 1270061 together with many other villages. While these lists do follow the same list of inhabitants as in Ludwig Schneider's book, what is more helpful is the fact that this list includes names of family members and columns for the area and date they came from prior to Galicia. The transcribed lists from film 1270061 are: